Casper the Friendly Ghost Wiki
Register
Don't have an account?
Sign In
Advertisement
in: Characters, Ghosts, Males,
and 9 more

View source
watch 01:36
We're Getting Mutants in the MCU - The Loop
Do you like this video?
Play Sound

Casper Ghostland #2' (2019 Comic Book)
Spooky the Tuff Little Ghost is a fictional character that appeared in titles published by Harvey Comics. Spooky first appeared in Casper the Friendly Ghost #10 (June 1953). He is Casper's cousin, although their exact relation is never specified. He generally resembles Casper except he has freckles, a derby hat, and a large, black nose.

Spooky is written with a Brooklyn accent, for example calling his girlfriend and fellow ghost Pearl, "Poil." His iconic derby hat is, therefore, a "doiby." Although he shares traits with The Ghostly Trio as far as loving to scare the living and being somewhat of a tough guy, he is not as cruel to his cousin as the Trio are, though he occasionally makes fun of Casper for being friendly, and Spooky has his moments of goodwill, as it was shown in some comics Spooky and Hot Stuff the Little Devil are good friends

In the original Harvey Comics, Spooky is a little ghost that lives in a haunted house in spook town, a region located in The Enchanted Forest. Spooky is also Casper's cousin and nephew to the Ghostly Trio where in most of versions he admires and idolizes them, unlike his cousin. Also unlike his cousin, Spooky is mischievous and he actually enjoys scaring humans.

Spooky first met Pearl in Spooky # 3, he found her house by accident when he was hiding from the "truant officer" who was attempted to return Spooky back to ghost school, surprisingly the officer happened to be Pearl's father. Pearl latter felt in love with Spooky when he rescued her from captivity by abusive witches who were enslaving her in her own house in one comic-book issue, is always trying to stop him from scaring, by reprimanding him, keeping an eagle-eye on him, staying with him all day, threatening to break up with him, or dating other ghost-guys. (Whenever she does, she always ends up finding fault with her new date and thinking Spooky is better by comparison, so she returns to him.) So Spooky is always finding ways to keep his scaring secret from Pearl, sometimes by making it appear that someone else did it.

The Spooktacular New Adventures of Casper

Spooky appears in the animated spin-off, and is really close to his comic book counterpart: He loves to scare "fleshies" and admires The Ghostly Trio, he can be hash towards Casper's friendly nature but in the end Spooky cares about his cousin (although the story of them being cousins is never brought up). He and Pearl have a really unique relationship, as most of the time Spooky gets annoyed by his girlfriend's naïve personality. His nose isn't intangible and can't go through solids. He was voiced by Rob Paulsen.

The Tuff Little Ghost appears in the CGI animated direct-to-video film, where he was asked by the Ghostly Trio to impersonate Casper in order to trick Kibosh to in believing Casper became a scary ghost, thus saving them from being vanished to " the darkness", however every of Spooky's attempts at scaring failed. He was voiced by Samuel Vincent.

In this re-imaginaning, Spooky appears as a minor character in the miniseries. He looks exactly like his classic counterpart but he doesn't wear his trademark derby hat. Unlike Casper, Spooky loves to scare "fleshies" and admires the Ghostly Trio, he is first seen during Ghostly Trio's big scare at the subway. He attends to Ghost School with Casper, as the only students. He is later seen trying to escape from Volbragg, and he appears for the last time during the celebration party in the end of the story. 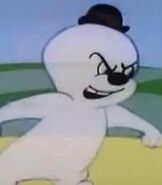 Spooky in the original cartoons.

Spooky in the animated series spinoff of the first movie.