Hot Stuff the Little Devil is a comic book character published by Harvey Comics and created by Warren Kremer, debuting in his very own comic book: Hot Stuff # 1 (October 1957). He is a child devil imbued with a mischievous personality and able to produce fire. He is one of Casper's friends, Despite being one of the most popular Harvey creations the character has yet to appear in other forms of media, aside of comics.

After Casper the Friendly Ghost and Wendy the Good Little Witch, Harvey Comics created another character based on childhood fears and settled on a devil character named Hot Stuff. As with all Harvey kid characters, most of the “bad” characters are merely mischievous at heart and usually have good intentions, despite being a little bit rascally. Harvey had such high hopes for the character of Hot Stuff, so much so that it didn't even debut as a supporting feature or in the Harvey Hits tryout series before going to its own series. It turned out to be a wise choice since Hot Stuff ranks as one of the most popular characters to come out of Harvey after Casper and Richie Rich. A popular theory implies that Hot Stuff was created using the Evil Casper from the cartoon short Fright from Wrong (1956) as one of the main inspiration, which makes him Casper's antithesis.

According to most comics, devils have much longer lifespans than humans, allowing them to live thousands of years. In some stories, Hot Stuff is at least 200-years old; however, his age is portrayed really inconsistently since according to other comics he's at least 2000 years old. Canonically in the future, he became an adult and married his girlfriend, Princess Charma.

Hot Stuff appears as a red child devil who wears a diaper (said to be made of asbestos) and carries a magical sentient pitchfork (referred to as his "trusty trident"), which is a character in its own right. Much to the consternation of his demonic brethren, Hot Stuff sometimes performs good deeds to irritate them.

However, in Casper and the Spectrals, Hot Stuff has taken more of a punk kid visual design, as he wears a more casual outfit: a black t-shirt, blue jeans, a metallic belt, and a spike bracelet. Compared to his classic counterpart, he has smaller ears, yellow eyes and a pair of long fangs.

Most of the time Hot Stuff is mischievous, lazy, Cranky, short-tempered, and he tends to fight bullies pretty often, also like any other devil he loves playing tricks on others and he can be very mean at times, But  in the end he is a good guy, He enjoys good deeds, and often helps the dwellers of the Enchanted forests with his problems.

In the revamped Casper and the Spectrals, Hot Stuff is a mischievous child too, but compared to his classic counterpart he is more laid-back and rebellious. He loves doing pranks and is seen as a trouble-maker by his family, but in the end, Hot stuff has a heart of gold even being able to sacrifice his own life to save his friends, as was shown in the comic book.

In the classic Harvey Comic stories, Hot stuff is a little devil who lives in a cave in The Enchanted Forest. Even though it was implied that Hell is his true residence and most of his relatives, including his father, live there, Hot Stuff prefers to stay in the human world, for he is always traveling across the world, having adventures and fighting monsters.

Even though Hot Stuff lives alone, his uncles, aunts, and cousins are recurring characters in his run of comics, with Aunt Clinker, Cousin Demo, and Grandpa Blaze being the supporting characters. Just like most devils, Hot Stuff wields a magical trident, which is actually sentient being named Tridey; however, it doesn't speak as much, for it usually acts only as Hot Stuff's main weapon, which allows him to cast magic, or serves as a spear while fighting enemies. According to the comics, tridents are devils' best friends and companions, and Tridey has known Hot Stuff since he was a baby. Tridey and Hot stuff are best friends but they have their differences and discussions from time to time.

In his adventures in the Enchanted Forest, Hot Stuff met Charma, a fairy princess, after saving her from some mean ogres. They both fell in love; however, both fairies and devils disapprove their relationship. Charma feels attracted by Hot Stuff's fiery and mischievous personality while Hot stuff's loves Charma good-hearted nature and occasional cranky temper. In the future, Hot Stuff grew up and married her.

In Casper and the Spectrals, Hot Stuff is a rebellious young devil who loves pranks, but he is also the son of the Ruler of Deviland, one of the 6 districts in Spooky town, which leads to a somewhat troubled family relationship. He befriends Casper and Wendy after saving them from a bunch of mean ogres that tried to kill them.

As a devil,  Hot Stuff possesses a vast list of abilities and powers that he uses to fight his enemies, some of these powers are used very often in his adventures and others are rarely seen.

Major appearances in the Casper franchise

Hot Stuff has retained a relatively low profile over the years, compared to other Harvey characters. This is primarily due to the fact that he has never appeared in an animated film, nor has he appeared on a great deal of merchandise. An animated series was attempted in the 60s and again in the 70s, but the character's nature has unfortunately kept him off the airwaves, and so he only appeared in comics. 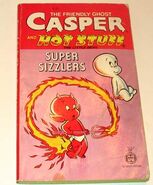