"Harvey Girls Forever" (2020 episode)
Fatso is a character created by The Harvey Entertainment Company that debuted in the cartoon Fright from Wrong (1957) likely the younger member of the Ghostly Trio, after this debut he made numerous appearances in comics, cartoons and most of the films making him one of the most recognizable and recurrent characters in Casper franchise.

Fatso is a big, bulky and corpulent ghost, like Casper he has blue eyes in most of his modern appearances, unlike the original comics where he had black irises.

Fatso is dim-witted, he has a passive personality and often follows Stretch's plans and ideas, his favorite hobby is to scare "fleshies" but he loves eating as much as scaring humans, despite being a ghost Fatso is known for his intense appetite. Like his brothers he disapproves Casper's friendly behavior and tends to act mean towards him, like the other members of the ghostly trio he isn't especially fond of Humans which he calls "fleshies" as a derogatory term, Fatso, just like his brothers, tends to treat Casper as a personal slave, however sometimes he shows some signs of true love and caring towards his nephew. He is the least intelligent member of the Ghostly Trio.

In early cartoons Casper live along a bunch of ghosts in a haunted house, these ghost were never given a name or a particular personality, however they can be considered as the predecessors of the modern Ghostly trio,However the Cartoon Fright from Wrong introduced the first versions of Stinkie, Fatso and Stretch, were they were finally written as named individuals with their respective personality.

Fatso is one of the most recurrent characters in casper franchice, having appaeaed in every version of casper, except "Casper and the angels", his portrayal is very consistent across different media.

Fatso appears in the first live action adaptation, where he is hinted to be brother of Casper's father. Like his siblings he wanted Dr. Harvey and Kat to leave the manor and treated them with hostility, He is voiced by Brad Garret and portrayed through CGI.

Fatso is one of the three ghosts that haunt The applegate manor in Deedstown, he despisses humans (fleshies) and along with his brothers they love to scare them away. Unlike the previous adaption, Fatso isn't actually related to casper, instead the ghoslty trio just allowed him to stay at the manor.

In this computer animated film Fatso is actually portrayed closely to his comic book counterpart, He is a major character, like his brothers he is great at scaring humans, however he is really upset about Molly's parents not being afraid of him. However his is really afraid of Kibosh who wants casper to become scary.

In contrast to previous incarnations, Fatso and his brother love and respect casper, Being able to cry when they miss him terribly as he was awa in scare school, According to the series, in his youth Fatso attended Scare school but he has expelled by Alder and Dash, along with his brothers, they used to be the typical unbeareable pranksters at school.

Fatso appears as a minor character ine 2010's Comic book, He and the goslty trio are teachers at a small school they installed to teach Casper Adn Spooky how to be scary, accoding to his flashback he met Volbragg when the villain was still a human, he only appears in the first comic book.

Fatso, along with Stretch and Stinky made a cameo apparence in Netflix's Harvey Girls Forever as pne of the residents of Harvey Boolevard, an alternatte dimension of the world where Lotta, Audrey and Dot live. 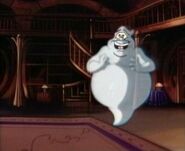 Add a photo to this gallery
Retrieved from "https://casper.fandom.com/wiki/Fatso?oldid=13918"
Community content is available under CC-BY-SA unless otherwise noted.