Casper Meets Wendy is a 1998 direct-to-video film based on the Harvey Comics character Casper the Friendly Ghost. It is the second spin-off to the 1995 film Casper. It was released by 20th Century Fox on September 22, 1998. The film is a sequel to Casper: A Spirited Beginning.

It was aired on Disney Channel around Halloween night October 27, 2006. As of 2010, the rights to this film were still owned by 20th Century Fox, as this film and Casper were the only Casper films not sold to Classic Media. This was the first major film for Hilary Duff, who was eleven at the time when this film was released.

At the tail end of a Friday night baseball game, with the bases loaded, the home team wins by a narrow margin as the batter hits the ball out of the park. Both the celebration of the home team and fans and the dread of losing for the visiting team are cut short as a mysterious spaceship floats over the park, thus snatching the attention of everybody there: the players, the fans, the hot dog and popcorn vendors and the announcer!

After the ship performs a tune, it dissipates into three floating balls of light. One of them forms into a ghost who initially appears as an alien, but thereafter, is revealed to be Fatso (Jess Harnell), a member of The Ghostly Trio, who releases gas which hits the scoreboard, causing a shower of sparks, also sparking terror. The other two ghosts of the trio, Stinky (Bill Farmer), and Stretch (Jim Ward), join in, causing panic in the park, as everybody scatters. Casper (Jeremy Foley), a shy, friendly ghost (nephew of the three ghosts), arrives, attempting to settle the rattled crowd, but the people are just as scared. The park is eventually empty, as Casper's uncles plan a vacation. Meanwhile, a dark character named Desmond Spellman (George Hamilton) is settled down in his mansion. He is the greatest warlock to ever exist, until the Oracle (Pauly Shore) tells him that in the future Wendy the Good Little Witch (Hilary Duff) will be the greatest witch to ever exist, and so he plots to kill the "little mall rat", with the advised "Mystic Abyss". He creates two warlock enforcers: Jules (Richard Moll), and Vincent (Vincent Schiavelli) with a mix of chemicals in a blender, exposure to thunder and lightning, and a spillover his catwalk balcony. He assigns them to go to Wendy's address (which the oracle printed on Desmonds' fax machine) and bring her to him if she comes near him. They prove what they think is a simple task by firing their hand uns through the wall.

Meanwhile, Wendy is living in the country with her three aunts Gerti (Cathy Moriarty), Gabby (Shelley Duvall), and Fanny (Teri Garr). While attempting to befriend the local paper boy, they foil it by slingshotting a green ball of goo at him, thus causing the newspapers to automatically slap him. She is angered, and while trying to prove herself to them, Jules and Vincent arrive with the purpose of abducting her. They begin attacking with their handguns.

She and her aunts narrowly escape Desmond's men as Wendy turns their weapons into water guns and traps them in a cage. On the run from her nemesis, she runs into Casper, who has been violently thrown around by his three uncles. They then become great friends, but of course, in the tale, a ghost's worst enemy is a witch,

and vice-versa, so her aunts don't get along with his uncles, and vice-versa. As a part of their plan to convince them to get along, he gets his uncles to haunt a dance, and she convinces her aunts to attend as well. The Ghostly Trio possesses three men at the party and end up flirting with the three witches.

Though everything seems to go well, the plan is foiled when their real selves are revealed to Wendy's aunts, who bluffingly threaten them with magic. Later, Wendy tells Casper about Desmond and that she and her aunts can't use powerful magic, begging him not to tell anyone about this. He accidentally tells the Ghostly Trio, prompting them to attack her and her aunts. She feels she has no choice but to fight them and uses a spell to cover them in plaster. This action is picked up by Desmond's magic tracker. The witches are attacked by Jules and Vincent. Before Wendy and her aunts have a chance to escape, Desmond arrives.

She screams in terrorizing when he tries to cast her into the Mystic Abyss to kill her as if she will never mess with him ever again, but Casper dives in there to save her, ignoring Desmond's warnings, when she screams for his help. Her aunts try to fight Desmond but they aren't powerful enough. Before he can throw them in along with Wendy, however, a giant three-eyed monster pops up and frightens him, causing him to fall into the Abyss instead. He dies and is erased from his existence. It turns out to be the Ghostly Trio, who combined together to defeat him. While they hold the Abyss open, Wendy's aunts pull her and Casper out of it. The Oracle proclaims that she is the greatest witch because she did something no other witch ever did: she befriended a ghost (Casper).

Finally, Casper, his uncles, Wendy and her aunts all bid each other goodbye. Before leaving with her aunts, Wendy gives Casper a kiss on the cheek resulting in him blushing. She says "Bye, Ghost Boy" and heads home with her aunts on their broomsticks. 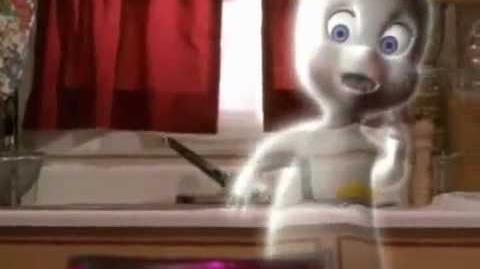 Casper The Friendly Ghost Casper Meets Wendy VHS Fox Video Commercial 1998
The World's most powerful warlock is about to meet his match. 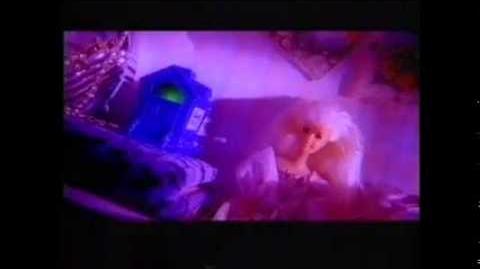 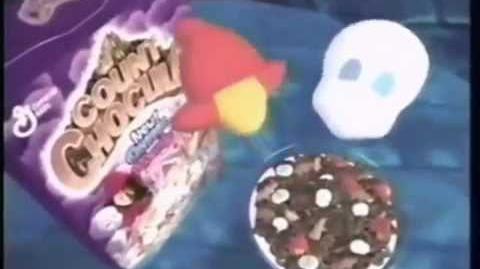