Casper: A Spirited Beginning is a 1997 direct-to-video film based on the Harvey Comics character Casper the Friendly Ghost. It is a prequel/spin-off to the 1995 film Casper, produced by The Harvey Entertainment Company and Saban Entertainment and released by 20th Century Fox on September 9, 1997 after the acquisition of the character from Universal Pictures. The film gives details to Casper's origin.

Casper (Jeremy Foley) is on a train full of ghosts, with no idea of where he is and completely unaware that he is a ghost himself. Instead of going to Ghost Central, where the train is headed, he is kicked off the train. Casper then finds himself in the city of Deedstown, where he unintentionally scares all of the town's citizens. Only then does Casper realize that he is in fact a ghost.

Meanwhile, a boy named Chris Carson (Brendan Ryan Barrett), a loner with a passionate obsession with the supernatural, and his father, workaholic Tim Carson (Steve Guttenberg), who is attempting to demolish the Applegate Mansion in order to proceed with his plans of a new renovation for the town. But Tim arrives to see people protesting the demolition of the building, which they consider is a historic landmark. The group of protesters are being led by Chris' teacher Sheila Fistergraff (Lori Loughlin). Tim attempts to reason with them, informing them that the old building is falling apart and that he only wants to improve the community by building a new mini-mall in place of the old mansion. The protesters refuse to give in, but just when the bulldozer is about to tear down the building, both the wrecking crew and the protesters are tormented by Stretch (Jim Ward), Fatso (Jess Harnell), and Stinky (Bill Farmer), the Ghostly Trio. They scare everybody away and take possession of the old mansion.

Meanwhile, Chris runs into a group of kids on his way to school. They torment and tease him because of his obsession with the supernatural. Just as Chris is about to get pulverized, the frightened victims from the ghost attack run past them, allowing Chris and his tormentors to flee. Chris knows that this was the work of the Ghostly Trio and goes to the mansion to see them. Inside the mansion, Chris encounters the Ghostly Trio, who are celebrating their victory. Chris desperately wants to become a member of the Ghostly Trio and he enthusiastically requests to join their group. But the ghosts just laugh him off and harshly reject him, since he is a human.

Meanwhile, the train that Casper was on arrives in Ghost Central, where new spirits are trained to learn the proper ghost lifestyle and work to receive a haunting license. Ghost Central is run by the evil Kibosh (James Earl Jones) and his spineless assistant Snivel (Pauly Shore) who discovers Casper is missing. Kibosh immediately becomes furious and worried about how he will look if some rookie ghost is wandering around without any proper schooling. Kibosh instructs Snivel to find Casper and bring him back to Ghost Central.

Back in Deedstown, Mayor Johnny Hunt (Rodney Dangerfield) warns Tim that if Applegate Mansion is not torn down by the next day then Tim will be finished. At school, some kids attempt to pull a prank on Chris by dropping a balloon full of gunk on him. But it backfires and the balloon ends up hitting Principal Rabie (Richard Moll). Angered he seizes a bully named Brock and Chris, But Fistergraff intervenes and gets Chris out of trouble and tells to stand up for himself. A news report then comes on the TV, with the Mayor and Tim telling the press that the demolition project will proceed as planned, despite a series setbacks, by which Fistergraff is outraged. Chris runs into Casper and they instantly become friends. Chris is thrilled to meet another ghost and Casper is excited to find a human who will not scream at him or run away; Casper and Chris are both lonely and feel like outcasts. Together they go to Applegate Mansion. Casper admits that he does not know how to act like a ghost. Chris tries to teach Casper how to behave like a true ghost. But then the Ghostly Trio shows up only to berate Chris. Chris introduces Casper to Stretch, Stinky, and Fatso. The Trio are happy to meet another ghost and become excited when they discover that Casper never went to training, and is therefore unspoiled by Kibosh. The three ghosts see a golden opportunity to prove that their techniques are better than Kibosh's. If they succeed, then maybe Kibosh will give up on hunting for them. The Ghostly Trio decide to invite Casper into the group and teach him everything they know. But, unknown to them, Snivel found them (and was eavesdropping) and leaves to report back to Kibosh.

And so Casper's ghost lessons with the trio begin, and Casper learns all kinds of new things, like how to go into "stealth mode" (become invisible) and how to go through solid walls. Meanwhile Snivel calls up Kibosh and tells him that he is found Casper with the Ghostly Trio and that the trio are teaching Casper unorthodox and illegal ghostly techniques. The trio are planning to use Casper to put Kibosh in his place. Kibosh is outraged.

Chris is sad and disappointed when his father does not show up to his school's open house that night and Fistergraff tries her best to comfort and support Chris. Back at the mansion, Casper is unable to act scary and Stretch realizes that this is because Casper does not want to scare people. Casper only wants to be friendly, but then they kick him out of the group, saying there is no place in the world for a friendly ghost. The next morning Chris is still angry at his dad for not showing up and Tim promises to make it up to him by spending more time with him. Chris is excited until he sees a sad Casper floats into to his room and explains that he

was kicked out for being too nice and that he is planning on leaving Deedstown. Chris protests and offers to help Casper, saying that Casper is his pal. Casper decides to stay in town with Chris, who becomes his new teacher. While Chris is giving Casper ghost lessons at school, Brock and his friends show up and tease Chris. Amazingly, one of them, Jennifer, sticks up for Chris. Brock gets attacked by Casper and gets into trouble with the principal.

Excited by his accomplishments, Casper flies off to test out his new powers. He is able to scare away a man who attempts to rob a convenience store and the owner of the store thanks Casper for saving his life. Casper is ecstatic and decides to use his ghostly powers to help people. Meanwhile, Tim's office catches on fire due to an accident by Bill Case, a professional bomber hired by Tim. Tim then found out that Chris's teacher is Sheila Fistergraff, the person leading the protestors in saving the mansion, which forces him not to attend the meeting. Sad and upset that his father once again put his job above everything else, Chris storms off but soon becomes hopeful that his dad will remember their other plans. Fistergraff shows up at Chris' house to return something that he left at school and Chris invites her inside before she even discovers Casper. She finally leaves and they prepare dinner for Chris and his father. Snivel sees Casper acting like "the fleshie's slave" and leaves to report back to Kibosh. Kibosh is disappointed to discover a human teaching illegal and unorthodox ghostly techniques to a ghost and goes to Deedstown and deal with the matter himself.

The Ghostly Trio discovers Casper's good deeds and fear that it is a threat to their reputation. So they go out to find Casper. When Tim comes home, Chris is disappointed with his father because he always neglected and ignored him. And when Chris tries to introduce Tim to Casper, Casper gets kidnapped by the trio and Tim does not believe Chris, grabs some of his son's belongings and throws them in the trash, and leaves to visit the mayor, breaking what's left of his promise. Angry about his father's actions and finally fed up with Tim's broken promises, Chris runs away from home. But then Brock and the bullies seize and trap him in the mansion, where Bill earlier planted a bomb inside.

The next morning, the Ghostly Trio is unable to find Casper and at the same moment Kibosh arrives at Deedstown and captures them. Snivel is sent out to find Casper. Tim wakes up to discovers that Chris is gone. He finds a note from Chris saying that he has run away. Casper flies in and meets Tim, who is at first frightened but then he reasons with Casper and they both decide to go out and find Chris. Tim rushes to save Chris when he discovers that his son is in the Applegate Mansion, which is about to explode. Tim hitches a ride with Fistergraff. Casper arrives at the mansion, and try to help Chris escape. Tim is able to get his son out of the house and Casper eats the bomb which explodes in his stomach, saving the mansion and the people. Kibosh is impressed with Casper's trick and Casper tells him that the Ghostly Trio taught him how to do it. However, Kibosh says that only ghosts that are family can haunt together, so the trio lies to Kibosh and tells him they are Casper's uncles. Kibosh allows Casper to stay with his 'uncles' and leaves them in peace. Chris and his father reconcile and the bullies get their comeuppance. 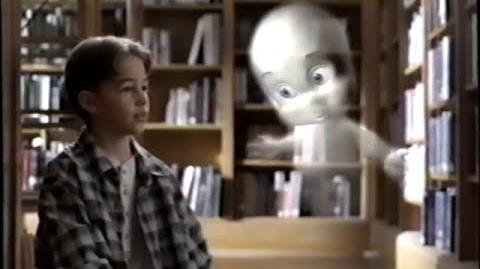 Casper A Spirited Beginning 1997 TV Spot
Takes you Back to how it all Started. 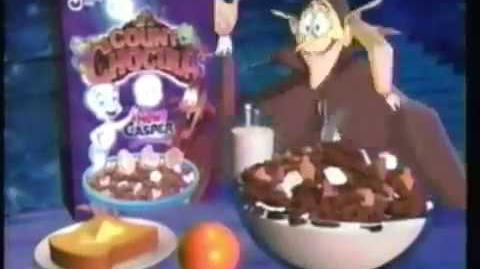 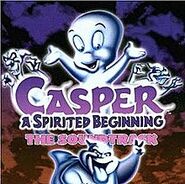