86 minutes
Casper's Haunted Christmas is a 2000 direct-to-video film produced by Harvey Comics and Mainframe Entertainment based on the character Casper the Friendly Ghost and was released by Universal Studios Home Video on October 31, 2000. Unlike either its theatrical or two direct-to-video predecessors, which combined live action and computer animation, this film was completely done in computer animation. It stars Brendan Ryan Barrett as the voice of Casper. Randy Travis provided original music.

After a scaring spree at a Drive-in theater, the Ghostly Trio's are confronted by Casper who is then confronted by Officer Snivel who informs him that his scare quota is down. The Trio take Snivel's whistle and blow it which summons Kibosh, the perfidious King of Ghosts, who decrees that Casper must scare someone before Christmas Day, according to ghost law which requires him to purposely scare at least one person a year, or he will be banished to the Dark, together with his uncles, for their failed responsibility for him, for all eternity. To make sure Casper scares someone, he confiscates the Trio's haunting licenses and flings them to the Christmas-influenced town Kriss, Massachusetts, on account of the Trio's hatred of the holiday, where they meet the Jollimore Family. When Casper's good behavior starts to act up, which includes befriending the daughter of the family, Holly, the Ghostly Trio call in Casper's lookalike cousin Spooky, who brings along his girlfriend Poil, to do the job disguised as Casper in the hope of fooling Kibosh.

With Casper and Spooky unlikely to scare someone after a series of failed attempts the Trio decide to plot a scaring spree stealing every Christmas present in Kriss, in a reference to How the Grinch Stole Christmas, and taking them to the Jollimores' house where they plan to lure the townspeople then set off scary booby traps to go out with a bang before being banished to the Dark. Casper along with Spooky and Poil scare the Trio using a fake Kibosh made from the Jollimores' giant Santa. Casper then summons the real Kibosh using Snivel's whistle to inform him he scared the Trio, fulfilling his ghostly obligation, however, Snivel informs Kibosh of the booby traps, violating the no scaring order on the Trio. To prevent Kibosh from banishing them to the Dark, the Trio claim they intend to spring the traps on themselves to entertain Kibosh. After the act, Kibosh accepts the Trio's claim and returns their haunting licenses before leaving with Snivel. The film ends with the remaining ghosts celebrating Christmas with the Jollimore family.

Baskin Robbins made a tie-in promotion with the VHS release of Casper's Haunted Christmas, by inventing a Casper-themed ice cream flavor that was available throughout December. Also, the worldwide ice cream store chain also inserted a coupon good for free ice cream sundaes inside every video. 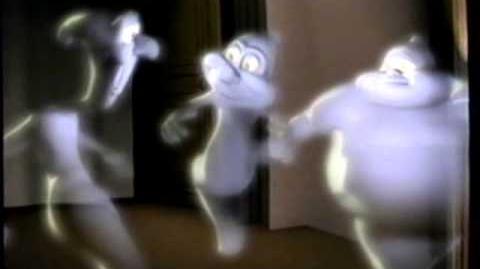